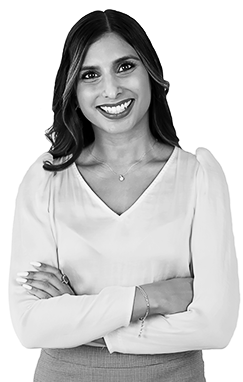 Chaitra Betageri is an associate in the Litigation Group at Frankfurt Kurnit.

Ms. Betageri advises on complex commercial disputes and white collar criminal defense, with a focus on intellectual property and entertainment matters. Her experience includes representing individuals and business entities in all phases of litigation in California state and federal courts and through private arbitration. Additionally, Ms. Betageri has experience in appellate matters before California state courts and the United States Court of Appeals for the Ninth Circuit.

Prior to joining Frankfurt Kurnit, Ms. Betageri was a litigation associate at law firms in Los Angeles and San Francisco, where she handled a broad range of disputes, including civil rights, employment, and business litigation matters. She previously worked at the Marin County Public Defender’s Office, representing clients charged with misdemeanors.

Ms. Betageri received her law degree from Berkeley Law, where she competed on the Trial Team and was a member of the Berkeley Business Law Journal and the Boalt Hall Women’s Association. She received her undergraduate degree from the University of California, Berkeley. As an undergraduate, she coached high school debate teams and participated in student government.

Ms. Betageri is admitted to practice in California.