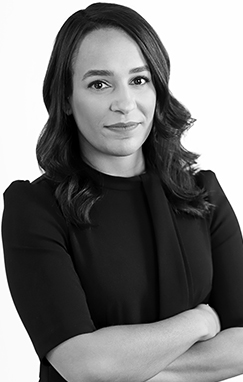 Jennifer Batista is an associate in the Entertainment Group and Interactive Entertainment Group at Frankfurt Kurnit Klein & Selz, advising clients on transactional matters across a variety of industries, including book publishing, theatre, scripted film & television, music and video games.

Prior to joining Frankfurt Kurnit, Ms. Batista served as Senior Director of Operations at Roc Nation where she negotiated partnerships with Fortune 500 companies, assisted in the management of multi-platinum recording artists, oversaw the contracting, planning, and execution of the Made in America Music Festival, advised the sales team on sponsorship deals, engaged and managed outside counsel, and streamlined contract processes across the company portfolio.

Ms. Batista earned a Bachelor of Music degree in Music Business from New York University and a J.D. from the Benjamin N. Cardozo School of Law with a concentration in Intellectual Property and Information Law. She is admitted to practice in New York.

IP Licensing and the Metaverse: Practical Considerations and Key Provisions for Agreement

Into the Metaverse: Virtual Worlds and the Law

Sean F. Kane and Jennifer Batista present "Into the Metaverse: Virtual Worlds and the Law" during a webinar for the Entertainment Software Association.