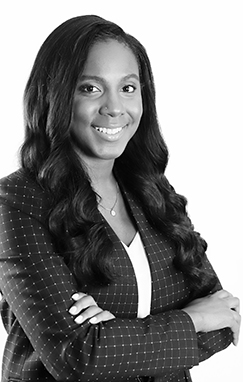 Taylor Washington is an Associate in the Entertainment group.

Ms. Washington handles a broad range of entertainment transactions for clients in the film, television, and book publishing industries.

Prior to joining Frankfurt Kurnit, Ms. Washington was a Law Clerk for the NBCU News Group at NBCUniversal Media, LLC., where she drafted talent agreements, pickup notices, indemnity agreements, and agency package deals for the production and distribution of CNBC prime time programming including “Deal or No Deal”, “The Profit”, and “Jay Leno’s Garage.” She also reviewed and negotiated talent appearance agreements for CNBC reporters, and advised and counseled business teams on other commercial transactions including venue and content licensing agreements. Additionally, Ms. Washington performed pre-broadcast review of long-form programming on CNBC, including “Secret Lives of the Super Rich”, and advised on potential legal issues pertaining to privacy, defamation, libel, and intellectual property.

During law school, Ms. Washington interned in the Enforcement Bureau at the Federal Communications Commission and in the Business and Legal Affairs department at Scripps Networks Interactive (now Discovery, Inc.), where she worked with counsel to structure and draft production and talent agreements. Prior to law school, Ms. Washington had extensive experience in the entertainment industry including jobs and internships with the Creative Artists Agency (CAA), the Recording Academy, Octagon, and Viacom.

She is admitted to practice in New York.

Taylor Washington is a panelist during the National HBCU Pre-Law Summit and Law Expo.

Taylor Washington speaks to students in the Media Law & Ethics class at Houston Baptist University as part of the Sports and Entertainment Law Speaker Session.

Taylor Washington is on the Young Associates Panel during a virtual program for the Sports & Entertainment Law Student Association at Howard University School of Law.

Taylor Washington participated in a panel at Howard University School of Law featuring attorneys working in the sports and entertainment industries from Events DC, Bruns Brennan & Berry, and more.