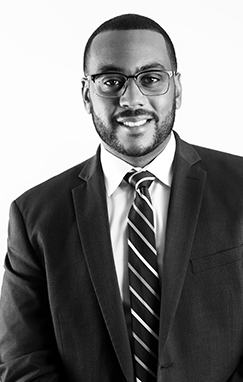 Sean Jefferson is an associate in the Entertainment Group.

Mr. Jefferson has wide-ranging experience in all areas of entertainment and media, representing financiers, production companies, producers, documentary filmmakers, directors, athletes, writers and independent distributors. He has negotiated complex single picture and slate multi-party financings both on behalf of producers and financiers. He has also represented producers in recent cutting edge political documentaries. Mr. Jefferson is experienced in structuring and negotiating rights acquisition, content distribution, sales agreements both domestic and foreign, and co-production and financing agreements.

Prior to joining Frankfurt Kurnit, he served as an associate in the Business and Legal Affairs Department at BRON Studios where he helped structure and draft rights acquisition, financing, and production deals and assisted with the negotiation of distribution deals for several feature films, including “Assassination Nation” and “Leave No Trace.”

Best Lawyers in America "Ones to Watch" 2021 (Entertainment and Sports)

Black in Copyright (Part I)

Variety’s 2021 Legal Impact Report includes Marcie Cleary for her representation of creators in film, TV and digital. Larissa Calva Ruiz, Hayden Goldblatt, Sean Jefferson and Alan Sacks are recognized for their work in entertainment finance. Ariel Sodomsky is included in the "Up Next" section for her work on TV production matters. View Article

Variety includes Sean Jefferson in their Dealmakers Impact Report “Up Next” list for 2020. View Article

Finding Outside Help to Finance Movies: Pandemic Uncertainty Has Prompted the Studios to Partner with New Investors

The Los Angeles Times quotes Sean Jefferson on different approaches to film financing due to the pandemic. View Article