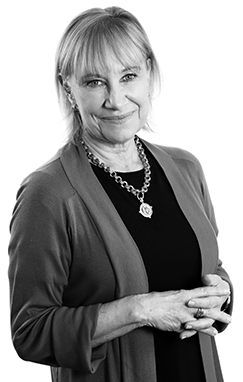 Jean Ward is counsel to our Entertainment Group. She is one of New York’s best-known theatre lawyers, with over 30 years’ experience representing producers, authors, film companies and other stage rights holders, not-for-profit theatre companies, theatre owners, creative personnel, and investors. She is recognized in the 2021 edition of Best Lawyers in America for Entertainment Law – Theatre and is listed as a “Super Lawyer” by Super Lawyers magazine.

She negotiates and structures domestic and international transactions including rights acquisitions on behalf of both producers and the licensors of stage rights to films and other underlying materials, theatrical syndication financing, state tax credit incentives, creative personnel agreements, development deals, licensing deals and a variety of other production agreements. She represents triple-threat authors Anais Mitchell (Broadway’s “Hadestown”) and Asher Muldoon (upcoming musical adaptation of “The Butcher Boy”), the composers and lyricists of the upcoming stage adaptation of “True Blood”, the stage and upcoming film version of “Cyrano”, and the co-bookwriter/director of the upcoming “Blues Brothers” stage musical.

Ms. Ward has been production counsel for Broadway and off-Broadway productions of such shows as “Stomp” (currently running off-Broadway and on tour), ”Woman in Black” at the McKittrick Hotel, ”Living on Love”, “Born Yesterday”, “The Toxic Avenger”, “Les Miserables”, “The Phantom of the Opera”, “Five Guys Named Moe” and “Miss Saigon”. For her client Troika Entertainment, she has been production counsel for non-Equity and Equity Tier U.S. and international touring productions of such shows as “Cats”, “Phantom of the Opera”, the Lincoln Center production of “My Fair Lady”, “Tootsie”, Andrew Lloyd Webber’s “The Wizard of Oz”, “42nd Street” (U.S. touring and Moscow productions), and many others. She has represented one of Ireland’s premier theatre companies, Druid Ireland, and its artistic director Garry Hynes on commissioning, licensing and producing numerous productions including their current development with the Public Theatre of a new musical incorporating music written or recorded by the popular Irish punk rock/jazz band The Pogues. She is also working on a stage adaptation of “Forrest Gump” (for Godlight Theatre Company), on various projects for the Irish Arts Center, and on an upcoming Broadway production based on the life and music of Ritchie Valens.

Ms. Ward graduated from Harvard Law School and has lectured on theatre law at the Practicing Law Institute, New York Bar Association, and National Law Journal seminars as well as in classes at Columbia Law School and NYU’s Stern School. She is admitted to practice in New York.

Entertainment Law in the 21st Century

S. Jean Ward presents at the program "Entertainment Law in the 21st Century” on “A View from the Wings: Theatre Law Overview, Business Structure and Rights Acquisition” for the Pennsylvania Bar Association.

Prosperity in Chaos: How American Political Disruption Portends a Golden Age for the Arts

S. Jean Ward speaks on a panel titled "How American Political Disruption Portends a Golden Age for the Arts" for the Irish American Bar Association of New York.

S. Jean Ward speaks on "Theater: Acquisition of Rights, Financing and New Developments" for PLI's Counseling Clients in the Entertainment Industry - for more information and to register, click here.

Let’s Put on a Show!

Super Lawyers interviewed Jean Ward on her start in the theater and legal industries in "Let's Put on a Show!". View Article

Mark Merriman and S. Jean Ward Quoted in The Deal

The Deal quoted Mark Merriman and S. Jean Ward on the evolution of the Broadway musical business.