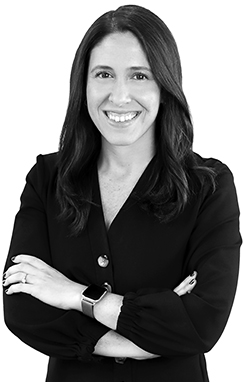 Sasha H. Levites is a partner in the Entertainment Group, where she represents clients in the film, television, theatre, and publishing industries.

Prior to joining Frankfurt Kurnit, Ms. Levites served as Manager of Business and Legal Affairs for FilmNation Entertainment where she negotiated international film sales and distribution agreements for award-winning titles such as “Nebraska” and “The Imitation Game”, along with motion picture finance and development deals. Ms. Levites also spent time in the Business and Legal Affairs department at MTV, where she focused on international content distribution and format licensing for the music networks.

Ms. Levites is recognized by Best Lawyers in America in the 2021 edition of “Ones to Watch” for Entertainment and Sports law. She was recognized in Variety’s 2019 “40 Under 40” New Leaders List, and in the Up Next List of Variety’s 2017 Dealmaker’s Elite New York Report. Since 2016, she has also been recognized in Super Lawyers magazine as a New York-area “Rising Star” in the Entertainment & Sports field. Ms. Levites currently serves on the Creative Executive Council for the NYU Production Lab.

Ms. Levites is admitted to practice in New York.

Best Lawyers in America “Ones to Watch” 2021 (Entertainment and Sports)

Sasha Levites speaks on the “The Art of Collaboration” panel for the NYU Production Lab.

Sasha Levites leads a virtual session on legal issues for the fellows of the Independent Film Project (IFP) Episodic Lab.

Sasha Levites teaches a class on "Entertainment Lawyers & Business Affairs" at the Ghetto Film School in the Bronx.

Sasha Levites participates in a panel about "Entertainment Careers" hosted by the film department at Vassar College.

Law360 Names Attys Who Moved Up the Firm Ranks

Deadline mentions Sasha Levites as counsel to Scoop Wasserstein who is producing “The Outfit.” View Article

Variety lists Sasha Levites as one of the next generation leaders in the entertainment business. Sasha is the only attorney listed. View Article