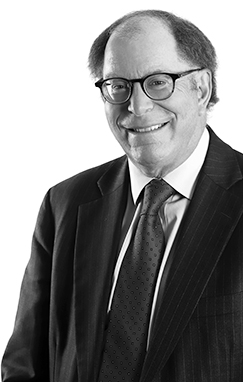 John B. Harris is a partner in the Litigation Group with more than 25 years of experience representing clients in high stakes civil matters and white collar criminal cases. He is a recognized leader in the professional responsibility and white collar defense bars.

In his legal ethics and professional responsibility practice, Mr. Harris defends law firms, lawyers, and other professionals against claims of legal malpractice, breach of fiduciary duty and fraud. He frequently represents law firms in disputes with current and former partners.

A central part of Mr. Harris’ practice is the representation of individuals and entities who are the subjects of either criminal or regulatory investigations. He has represented public figures, corporate executives and securities industry professionals against allegations involving collateralized debt obligation and mortgage fraud; anti-money laundering investigations; insider trading; securities and accounting fraud; and mutual fund pricing violations. In addition, he has advised clients on research analyst independence issues, Foreign Corrupt Practices Act cases, and "spy shop" matters. Mr. Harris understands that his clients are best served when charges are not filed by prosecutors and regulators, and he has had substantial success for his clients in accomplishing this result.

Mr. Harris has litigated matters in New York State and federal courts (Southern and Eastern Districts), and appeared in numerous SEC, FINRA and Departmental Disciplinary Committee proceedings. Before joining Frankfurt Kurnit, he was a partner at Stillman & Friedman, P.C. and Ballard Spahr LLP. Previously, Mr. Harris was a reporter for The Hartford Courant. Mr. Harris is admitted to practice in New York and Connecticut.

John B. Harris presents, "Ethical Traps for the Investment Practitioner" during the American College of Investment Counsel's fall meeting and education conference.

Ethical Issues for In-House Counsel & Those Who Advise Them

John B. Harris co-chairs the New York City Bar program, “Ethical Issues for In-House Counsel & Those Who Advise Them.”

Current Ethical Issues for In-House Counsel & Those Who Advise Them: Litigation Perspectives

John B. Harris presents "Current Ethical Issues for In-House Counsel & Those Who Advise Them: Litigation Perspectives" during a webinar for the New York City Bar.

John B. Harris presents “Hot Topics in Ethics for In-House Litigation Counsel” during a webinar for Celesq.

John B. Harris moderates the panel “Nativism in American Immigration, Past and Present” during the Anti-Defamation League's “Never is Now” symposium at the Jacob K. Javits Center.

John B. Harris co-chairs “Current Ethical Issues for In-House Counsel & Those Who Advise Them: Litigation Perspectives” during a CLE for the New York City Bar. More information here.

John B. Harris presents, "The Use (or Abuse) of Mandatory Arbitration and Choice-of-Law Clauses" at Mondo.NYC 2016.

John B. Harris speaks on “Attorney-Client Privilege in Broker-Policyholder Communications: Maintaining or Attacking Confidentiality” for Strafford.

When Should Lawyers Tell Clients They’ve Been Disciplined?

The Hill quotes John B. Harris on the Jan. 6 riot investigation committee’s claim that former President Trump engaged in a criminal conspiracy in his effort to overturn the 2020 election results. Read more.

John B. Harris quoted in The Hill on January 6 Selection Committee Subpoena

Law360 mentions John B. Harris as counsel to the executives who sued Lubbock National Bank over the mismanagement of their employee stock ownership plan. View Article

This past week, New York has taken a number of steps to restrict movement in and around the State in an effort to contain the COVID-19 crisis. Governor Andrew Cuomo has issued executive orders and the chief judges of the state and federal courts have issued administrative orders that have had a sweeping impact on the legal industry as well as the business community at large. Read more.

The New York Law Journal quotes John B. Harris on the ethics of meetings between prosecutors and defense lawyers in an article about accused sexual predator Jeffrey Epstein. (Behind paywall) View Article

At the request of a non-party, the US Court of Appeals for the Second Circuit recently disqualified the law firm BakerHostetler LLP ("Baker") from representing its client Prevezon Holdings Ltd. ("Prevezon"). Read more.

Anyone who has ever had to litigate a dispute knows how important the attorney-client privilege is. Read more.

Not Just a New York State of Mind: Nonresident Lawyers Must Have a Physical Office in New York

On Friday, the United States Court of Appeals for the Second Circuit struck a blow to nonresident lawyers looking to practice in New York State. Read more.

Masking Tapes: An Analysis of the Law of Secret Recording in New York

Law firms often struggle to determine when the rules of professional conduct permit representation of clients who compete in the marketplace. When is it OK, for example, to represent clients with competing patents, trademarks, or copyrights? A recent Massachusetts Supreme Judicial Court case provides important guidance for IP lawyers -- particularly those representing clients with patents. Read more.

In a thrilling and important development, New York has promulgated a new Court Rule, 22 NYCRR § 523 ("Section 523"), that allows lawyers admitted in other jurisdictions, but not admitted in New York, to practice here under certain circumstances. Read more.

As hurricane Joaquin barrels towards the Northeast, New York lawyers may be reminded of the damage caused by Superstorm Sandy as well as other recent disasters. Read more.

A Wake-Up Call For Attorneys On Using Recorded Conversations

John B. Harris in the New York Law Journal

John B. Harris was featured in the "On the Move" section of the New York Law Journal. (Article behind a paywall)  View Article

June 15, 2015 New York, N.Y. - Frankfurt Kurnit Klein & Selz, PC has added John B. Harris as a partner in the firm’s Professional Responsibility Group. Mr. Harris will also be a member of the firm’s White Collar Defense and Litigation Groups, and will join the editorial board of the law firm’s New York Legal Ethics Reporter. Mr. Harris joined the firm today. Read more.